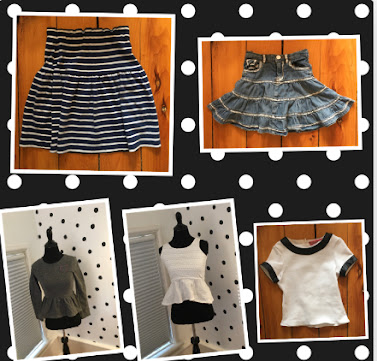 I have started a business! Kind of. This upcoming spring, I'm going to begin to sell DIYed clothing I've made! Some of the money I make will go to charity. I am very excited about this, and I have a lot to show you!
However, something to mention first! I'm actually in my old town (see this post for the story) and I saw my best friend C. She loves editing photos and videos of celebrities and posts them for awesome people like you guys to see. Look her up at millsmp3 on TikTok or stylingmillie on Instagram. We decided to do a mini last-minute collab. Watch this edit of hers and follow her! 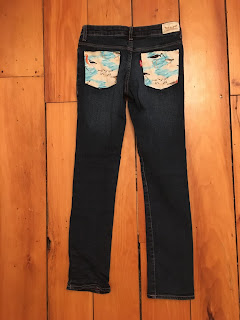 My sister requested that I sew her some cool jeans. She showed me exactly what she wanted and chose the fabrics. I just did the sewing! I used parchment paper to trace out the pockets, cut the fabric and used nail polish to soak the edges. When I tried out this hack for the first time I was skeptical, but it turns the edge of your fabric into a plasticy edge that won't fray. This saves me from having to hem this. All I had to do was hand-sew the fabric on the pockets, which was actually really tough since it's denim (cough-cough captain obvious here.) I also made J another pair with a floral print. 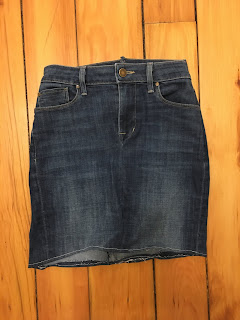 My mom had an old pair of jeans that she gave to me for scrap material. However, this was a perfect way for me to try out a new idea. I cut the legs off, because I was going to turn this into a skirt! I had to hem the bottom and take in the waist, both in the back and the sides. The main problem, however, was re-doing the back and front so they were flat, and fit like a denim skirt. This is hard to explain, but basically the jeans fit like pants and not a skirt. This was a big altering project, and sewing through the denim was tough. I was so nervous I'd break a needle (which I don't know how to replace.) Luckily, this all turned out.

Now, here are the clothes I'll eventually be selling where I live (Ontario, Canada.) The whole story is explained here. 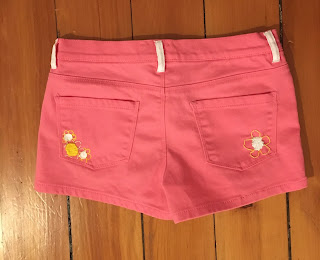 This is my favourite piece from the second haul. Apologies for the lack of "before" photos, which I promised as these clothes are all DIYs, but just imagine plain hot pink shorts. For some reason, I knew right away I wanted to embroider daisies on the pocket. Some of them aren't the perfect daisies - my embroidery and knowledge of daises ain't on point - so I took fabric paint to tidy it up. Now I had another idea I was nervous about: I decided to take the white fabric paint and paint the belt loops. Surprisingly, I like it! I think it helps to tie the embroidery in and makes this very cohesive and cute. 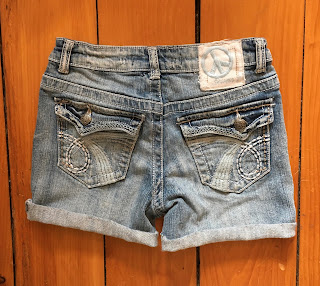 I have one other pair of shorts, which aren't an item I'm specializing on to sell. However, I got a pair of Sevens jeans (which had the nicest detail on the back pockets, I wanted to keep them!) and cut them into shorts. I wanted to make a cuff and not leave them distressed, so I cut them a couple inches longer and then rolled the hem up. The finishing touches: sewing the cuffs together by hand and adding a Silver Fashionista label. 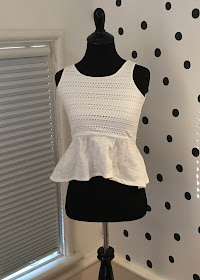 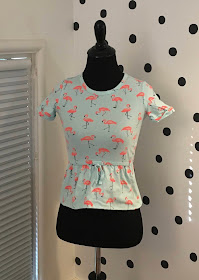 One item I am featuring in my booth will be these peplum tops. I got a ton of girls' summer dresses - elastic waistband, comfy fabric - that I just chop the bottom off of, hem it and ta-da! It's an adorable shirt. The "peplum" part is the ruffle at the bottom, which isn't a design you see a lot in stores. Starting on the left, this white one is very classic but tempting to buy, as white goes with everything. On the top it has this really pretty lace/mesh overlay fabric. On the right is something a little more playful, with florescent flamingos on a sky blue background. Very summery. 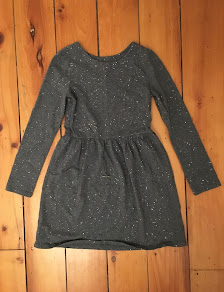 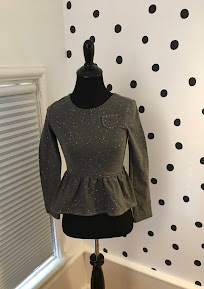 The final peplum I have to show you today is a gray one with silver sparkles, which I immediately knew was from the Gap. I used to own a white shirt with glitter on the fabric from that same collection. This was a straight-forward process. The final detail was adding a pocket, outlining it with bright pink thread for a pop of colour. Unfortunately you can't really see this in the after photo, but it turned out pretty well. 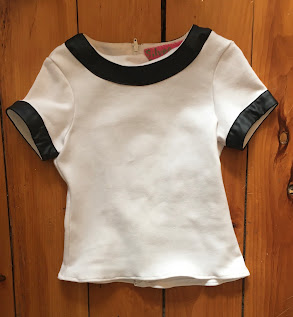 This was a costume dress was a very up-and-down silhouette, so I couldn't turn this into a peplum. It looks a hundred times better than it did as a dress, though! The bottom of the dress had these weird black leathery rectangles all around the bottom that made me think of a piano. I kind of hated it. It was very, um, mod-looking to say the least. I cut those out carefully and sewed the bottom as neat as possible. I think the black around the sleeves and collar is statement enough, so I kept this one easy-breezy. 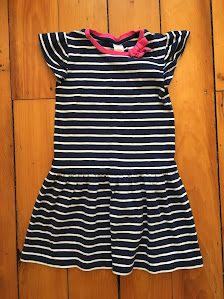 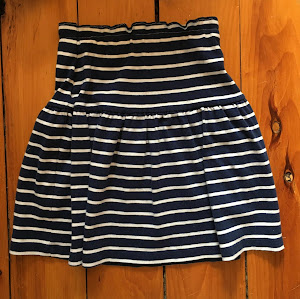 Now is something new: a dress-to-skirt transformation! I could've turned this into a peplum blouse, but there were two problems: the bodice part of the dress is too long, and I hated the pink around the neckline. I realize this was, what, a six-year-old's dress? But as a teen, I think it's pretty cheesy. Instead of dealing with those problems I made this into a skirt. I cut the dress in half and hemmed the top of the skirt. Now for the waistband - I've tried this technique once here - I cut a piece of elastic and sewed it to the inside where I had just hemmed. 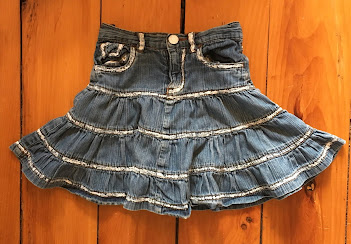 Ending off with one of the best pieces, in my opinion. This little girl's denim skirt was very cute already, with the silhouette and tiers, so I was stuck on what to add. However, you know how denim has such thick seams? Well, I thought it would be cool to colour those for a cool contrast. Since it is a little girl's skirt (size four) I thought about turning the seams multi-coloured, but all-white took long enough. I spent three hours (not including drying time) puffy-painting over all of the seams. The button I painted with nail polish to match. Now, what do you think?

Thank you so much for reading! Once again, go follow my friend and please read this post for some recent exciting news! Bye, y'all!

I Was Nominated For An AWARD?! 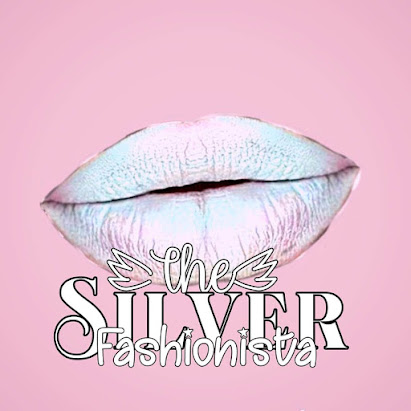